Heartland: Horses are People Too 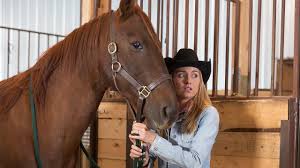 Heartland is a story about a family that chases their dreams and takes care of life’s setbacks, while focusing on what matters most: courage, love, family and a place to call home and a place that you can always come back to. Heartland is also about a teenage girl who is a talented with horses but also has a lot of family drama and growing pains.

Amy and Lou Fleming are sisters who is also the main characters in the series. Amy spends what little free time she has caring for and training horses, many of them injured and abused, just like her dearly departed mother once did. Lou, who lived in New York working as a lawyer, returned home after her mother’s death to help run the ranch. And then there’s Ty, a foster kid who would like nothing better than to tie the knot with Amy.

The series is set in the Canadian Rockies, Heartland has yet to face a zombie attack or an assault of others from the frozen North. And after watching almost five seasons, I’m pretty positive it never will. They worry over whether Lou can make her new startup financial service work, not if she will be someone’s pawn in a sick and twisted game. Back at the ranch, life is filled with homegrown pleasures and less sensational but, no less important problems. In a television landscape dominated by blood and sequins, it is both strangely familiar to us and yet somewhat different. To me it is like a 21st-century version of The Waltons. Folks may throw a fist or two, but they rarely start shooting up the place.

I grew up and still live in a small town. The kind of town where everybody knows everybody, so I relate to this T.V. series throughout my entire life. If I did something to get in trouble, the whole town knew about it before my parents did and my parents knew about it before I got home. But the biggest part of this series that relates to me is the horses. The horses in this series are abused and battered and sometimes in eyes of people who do not understand them, they seem broken beyond repair. Horses are a lot like people to a certain extent, in other words, horses have feelings, they learn things just as we do, they mourn the loss of another, they can be moody; just as people can be all these things and more.

I went into a deep depression in August 2010, my aunt died from a “freak” tractor accident and I felt that the only thing that made me the least bit happy was and still is spending time with my horses. My aunt was everything to me, we would fish, hunt, ride horses together; we were considered to inseparable. Every day, I would come home from school, I would go to the barn and sit in the tack room and do my homework. Afterwards, I would saddle up and ride for as long as I could. I rarely spent time in the house unless it was suppertime, bath time and bedtime.

One day while I was in the barn I started realizing I was not the only one mourning the loss of a loved one. I went in the stalls and found that the horses were not eating as much as before my aunt had died, that they were not their happy-go-lucky selves anymore. This made me realize even more that horses are a lot like people, they mourn just as much as humans do. This television series puts it in perspective that horses whether or not they seem from the outside broken to no repair, just as humans can sometimes be, that in the end we are all fixable and repairable. I just takes time and patience for both human and horses. This also goes for any animal of any kind: dog, cat, cow, bird, etc. For the people that do not understand and realize animals have feelings too, it may not be expressed as humans but they do have them. It just takes time and understanding and patience and most importantly we have to listen.

Link to an episode: https://www.youtube.com/watch?v=SnF2R5dh-kg

As I sat in class and thought about what I wanted to review I thought of my addiction to not just Netflix but a specific series on Netflix called “Heartland”. I am on Season 5 Episode 6 and there are 26 episodes in one season. I choose this series because it focuses on country life in small towns where everybody knows everybody and how the hospitable people that live in Calgary are nice, friendly and helpful to anybody that needs help. It focuses on the aspect of animals, mainly horses and how they have feelings and are actually really smart animals. I myself know this because at one point I used to own nine horses, I know just how smart and stubborn they can be but in the end if you listen and try to understand them they are almost in a way “human-like”. The same goes with the people in the story, they sometimes might not like what Amy Flemming has to say about their horses and sometimes even about the person themselves but once that person takes a step back and realizes that she might be right, they understand. In the series “Heartland”, it is about reality and a community coming together in times of need. Which seems to be lacking nowadays, especially where I come from.