Have you ever felt so immersed in something that you forget that it is a game or a book and you start living inside that world? Has something ever presented a question that made you think it didn’t have an answer but was interesting nonetheless? Destiny provides those feelings for me in a very vivid sense. What is Destiny? Destiny is a Mass-Multiplayer Online Role-Playing First-Person Shooting game made by Bungie Studios set around a dystopian period of time in the future where Earth has fallen to ruin. The once-colonized planets of our Solar System, including the Earth and our Moon, have been taken over by various alien beings and machines that all aim to end every last remaining humans on earth. The only thing standing in the way of the extinction of our race is you, the player, and a couple hundred thousand other players exactly like you.

You are what is known as a Guardian: A being made of light that was brought back from the dead by the Traveler. The Traveler is a cosmic being of machinery that causes events nothing short of miracles, such as bringing water to mars upon its arrival to the planet, or calming the atmosphere of Venus and making it habitable. The problem is that the Traveler has an enemy: another cosmic being simply known as the Darkness, and it makes sense that the aliens and machines that try to kill you are minions of that Darkness.

In fact, what makes this game so intriguing to me isn’t the characters, the places, or even so much the story itself, but the way the story is told and the questions that it inadvertently presents in your mind. Given that the setting is our universe and beyond, the additions that could be made are theoretically endless. The way the game is presented lends so much to the player in terms of filling in the blanks using your imagination. The places you go to are so rich in construction that it sparks that curiosity inside me and makes me want to explore as much as I can. To sum it all up, what I love about this game is the sheer size of the world it presents, the complexity of the characters and setting within, and how it makes you think while you play it. It isn’t just one of those shoot & loot games with a flimsy story with missions as the only source of continuity. Destiny used to be like that; it used to be so cut and dry that you could literally spend a day or two and be done with the entirety of the story. Destiny makes you wonder while you play.

For example, I often wonder what happened to make that universe what it is? Like, what happened before the Darkness came? How did the world exist in what the game refers to as the Golden Age? So many things exist that are remnants of the Golden Age that there is no doubt that it happened. Interplanetary personal travel, An artificial intelligence ruling over a network of satellites built to protect us, whole cities built on Venus and Mars that now stand abandoned and decrepit, the existence of Exos: Human-like robots with consciences that function just like humans do; we’ve only begun to scratch the surface. The only locations introduced in the game go all the way from Mercury to the Asteroid belt – The Reef – and to the rings of Saturn. There’s even a subspecies of humans called The Awoken who have the ability to use magic and who live in The Reef that are descendants of the first humans who tried fleeing the Solar System when the Darkness attacked in an event known as the Collapse of the Golden Age. These are all questions of such magnitude that you can’t help but think about them even though you know there are no clear cut answers to them.

To give an example of one such question, let me tell you about a particular mission on which you’re sent to the ruins of the Ishtar Collective’s research academy in a jungle basin on Venus. The time-travelling machines I mentioned earlier are called Vex. Nobody knows how they came to be but all we do know about them is that they’re out to kill us, the players, and turn every planet into an efficient machine according to their designs. The most impressive fact, in my opinion, is that the Vex share one mind across a million units, however they are not comprised of entirely machinery. The game mentions that they have a mind that’s equal parts machine as it is biological. The Vex themselves are also older than humanity itself and yet appear to have been made in such an advanced fashion that you know they’re from the future. It’s a paradox of such intensity that it’s almost unsolvable. In the mission, you have to collect a Vex Mind Core from a rather large specimen to further understand the beings. A few missions later, you’re tasked with taking down a Vex Gate Lord. The gate that this particular Vex protects and rules over is one of many that the Vex use to instantly teleport through time and space. According to your companion’s analysis of what the Ishtar Collective had on Vex Gate Lords, they keep the realms the Vex manage locked out of time. They literally lock an entire dimension and timeline from the rest of the time space continuum. If that doesn’t sound interesting then I don’t know what else to tell you to have you hooked into the story. Ultimately, Its things like that stated above that attract many people to this game and keep them hooked even a year after it launched.

Although Destiny got a lot of negative reviews in it’s first year of launch, people still bought the game regardless. Destiny was one of the top 10 most pre-ordered games of 2014, unfortunately, by that same token the game was also one of the most returned games of 2014. To show one example of a review from 2014, Metacritic.com’s users gave Destiny a 4.5 out of 10 with 45 Positive, 40 Mixed, and 52 negative reviews with one of the many problems being that the game’s missions were too repetitive and that the game was only fun if you had friends to play with (1). Another of Destiny’s biggest downfalls was that it was strictly required to have online capabilities to play the game, which meant you had to have either a Xbox Live or Playstation Network account to even log into the game. Although their first year was not without bumps and potholes, Destiny’s designers at Bungie Studios have been steadily improving the game having since released two DLC’s to expand on the first game and a third massive DLC to change everything that people said was wrong with the game during year one. Bungie released The Taken King expansion to commemorate the first anniversary of the game since its launch on September 9th, 2014. Since the drop of The Taken King, people have taken to Destiny in droves. Bungie has always found ways to make their games fun for those who aren’t into serious gaming. For example, in one of the Raid missions in the newest DLC, The Taken King, there’s a secret room along the path to the boss room that has a monument with a large horizontal ring on it and an interact-able orb in the middle of the room. According to Bungie developers themselves, that room is a basketball court (2). Bungie put a basketball court on board an enemy mother ship in a mission in which you destroy the ruler of that ship. Those once dissatisfied with the game have found themselves back in front of the TV playing for hours on end with the rest of the community.

As an avid player of Destiny, I highly recommend it to those looking for a good experience with a title that’s both MMO-RPG and a smooth playing FPS. It helps that the game now has a solid story line that takes a good bit of time to finish and the fact that the game is closer to completion now than it was in its first year. However, whether you decide to play it or not, I leave up to you to decide. “Eyes up, Guardian.” – Ghost Works cited: (1 http://www.metacritic.com/game/xbox-360/destiny) (2 http://gamerant.com/destiny-raid-secret-room/)

My review will be on the video game Destiny produced by Bungie, Microsoft, and Activision studios. Destiny is a Mass Multi-player Online Role-playing First Person Shooter (MMORPGFPS) set in a dystopian time period more than a few centuries in the future. It is also a constantly evolving game; they’ve made many changes throughout the year it has been out and they will likely continue to make many more. The reason for this review is that I’ve always been interested in what happens to our world after a ‘collapse’.

It is questions like those that spur on the curiosity of the players that play this game, and the whole premise behind the game is to defend our little world from an enemy simply known as the ‘Darkness’. There are alien scavengers, dark acolytes from another dimension, militaristic galaxy conquerers, and time-traveling machines that imagine your demise in the infinite simulations running through their core mind.

It’s a game that represents a never-ending, up-hill battle to protect your life and the life of every person left on Earth. They call you Guardian, and you are made of the light that the darkness fears and as such, you are our last hope. 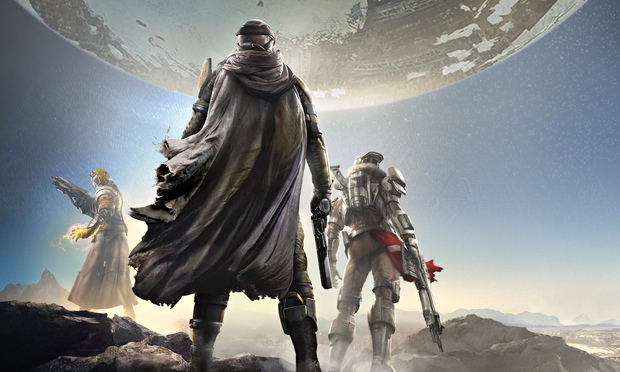